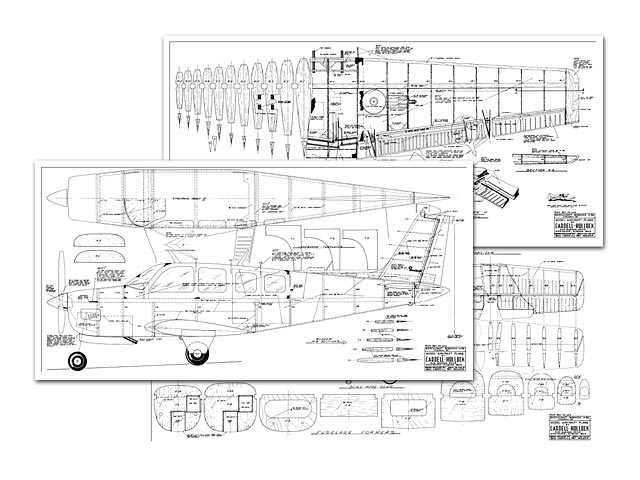 Quote: "This .91-powered Beech executive craft is an exquisite example of Precision Scale at its best. A scratch builder's project par excellence.

By Bud Caddell. Photos by the author. Flight shots by Gary Tatasiore.

Yep! It's a Bonanza, even though it doesn't have that funny looking V-tail. However, it's a direct descendant of the original that's been in continuous production since 1947. The V-tail was originally a cost and weight saving scheme. Although it appeals to some, the V-tail is now outsold by straight tailed Bonanzas at a 3-to-1 clip. It wasn't much of a dilemma for me to decide which one to build - the A36 is a stretched version and better suited for R/C than other Bonanza models.

The scale is a 2-5/8 in-to-the foot. I kept scaling until it was large enough for a Webra .91 to fit comfortably in the cowl, along with a Tatone .91 manifold. The A36 has a nose gear that is as far forward as a nose gear can be. The nose strut also has a forward rake so, even though this is a big model, it did become a little crowded in the cowl area. The nose gear mount is somewhat unconventional, but it has worked out very well. I happened to have some magnesium angle stock from which to fabricate it. I'm sure some tempered aluminum angle would work just as well.

I'm not going to give you glue-joint-by-glue joint run down of the construction. We've covered everything pretty well in the plans. However, there are a few high points I'd like to cover.

Once the crutch is laid down and the bottom formers are glued in, do as much sheeting as you can before unpinning. Support the side sheeting off the board halfway up the crutch, so that you'll have some balsa to glue to when you start on the top half. The foam used in the cabin area is urethane, and polyester resin doesn't attack it.

Cut the cabin outline from the foam, tack-glue between formers F-2A and F- 6A. Shape, using the templates furnished in the plans. When to the proper contour, apply three coats of Johnson's paste wax to the foam. Apply two layers of 8 oz fiberglass cloth, letting the cloth overlap the balsa about an inch. Feather-edge the cloth into the balsa by applying masking tape over the edges of the wet cloth..."

The late Bud Caddell was a friend of mine, truly a master builder. I didn't belong to his club because it was the worst flying site I had ever seen, on top of an old slate dump, once active as a coal mine. Although the runways were asphalt, coal dust was everywhere, and all over your model when you got home. Near a bad neighborhood infested with redneck po white trash, situations with the neighbors were not enjoyable, some club members strapping on a pistol before arriving. I always met Bud at the hobby shop on Saturday mornings, where he would arrive after mailing his plans at the nearby Post Office. At that time (early eighties), Beech encouraged modelers to build their models by publishing nice scale drawings of their many designs. Bud would take the Beech drawing and lay it on the floor, then take a picture using slide film from a tripod mounted camera. When developed, he would insert the slide in a projector and focus it onto a clean wall with a large sheet of paper. By moving the projector, he was able to get an image on the wall exactly the size he wanted. Then he would trace around the image until he had enough detail to build the model. Yes it was crude but about all that was available to modelers at the time. Once the model was finished, Bud would turn the plans over to Pat Hollock, who would draft the most wonderful plans anybody had ever seen. Bud placed ads in the back of magazines and sold plans all over the world. He once came into the hobby shop, fresh from the Post Office, and announced, "Do you realize how much it costs to send a set of plans to New Zealand"? I'm sure it wasn't cheap, with the size and cost of the mailing tube he always used. I never flew any of Bud's Beech designs, but I did fly (and land) his FW-190 in Pat Hollock's back yard. It flew like a pattern plane. Later Bud bought some land and moved out to the country, and when I asked him why he did it, he replied, "I'm just tired of being evicted." Bud passed away in '01, but his son Jeff still has all his old plans.
DougSmith - 27/04/2018
Add a comment