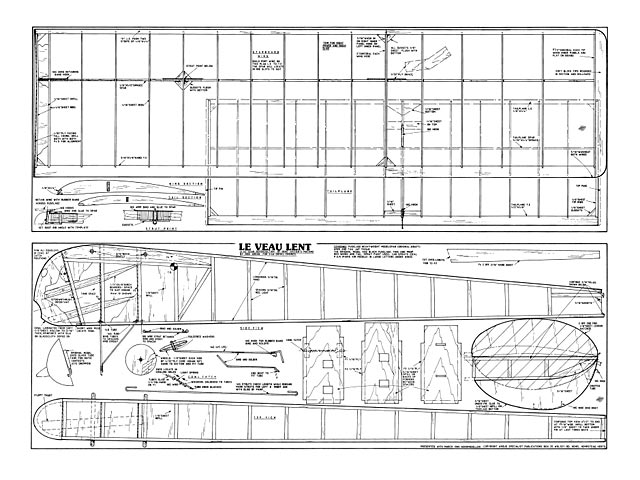 Note this here is a later plan and article, published in Aeromodeller March 1989.

ANCIENS modellistes who attended the International Weeks at Eaton Bray in the late 'forties and early 'fifties will remember the French participants who flew with such panache. One of these fliers was Rene Jossien of Paris Air Modele (King Rene to readers of the SAM 35 Yearbooks). Whose models Le Sphinx and Veau Lent were featured in the 1951-2 Zaic Yearbook. Now, I have fancied building these for some time (many years in fact) but it was not until eighteen months ago that I did anything about it.

Sphinx was the first project to be realised. Largely as a result of this I had the good fortune to make contact with Rene Jossien himself. I have consequently been able to verify many points, some fairly major, others minor, in connection with Veau Lent. To the best of my knowledge, no full-size plans of this machine exist, and, as you will appreciate, there is a limit to the information available in a small drawing. Rene has helped fill in the gaps.

L'histoire. The original Veau Lent was built in 1949 and carved out for itself an excellent record in competitions, including 2nd in the 1950 French Championships. The method of scoring at that time was given by the ratio glide/motor run; convenient - and necessary in the absence of reliable timers. A ratio of eleven was claimed which was pretty good at the time (forgive me if I state the obvious, but younger fliers may not be familiar with the system).

A Delmo 5 cc diesel supplied the horses for the original. I am not acquainted with this motor, but was sure that a modern equivalent would be too heavy and too powerful. A PAW .19 seemed a much better choice. Present-day requirements dictated the use of a clockwork timer, an internal metal tank, and fuse operated D/T. This latter presents no problems as the tail fixing is just right, with no fins in the way! In fact, I wished I had used a clockwork D/T, when searching vainly for the model one day - it turned up, luckily.

Purists may wish to try the metered glass tube fuel tank but I doubt if it would be accurate enough for modern contests, although, in its day, it was perfectly suitable for ratio scores. It may occur to others to fit radio: there is room inside the fuselage, but this is a real power duration model and to my mind such an act savours of blasphemy and witchcraft..." 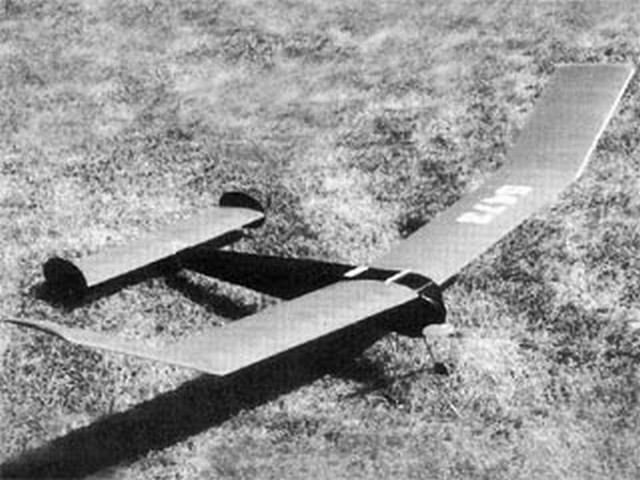 With your "Le Veau Lent" publication, I thought you might like this photo of the designer, the late Rene Jossien, sitting in my garden with the original 1949 Le Veau Lent fuselage (his cat destroyed the wing & tail!). Photo taken in 1994/5 [more pics 003]. A couple of interesting points. The propeller isn't broken. Rene used a single-blade prop, with counter-balance, in 1949, and that's what many of the top FF competitors use today... The engine is the very last model made by Delmo, and artistic Rene painted the engine black to match the fuselage (and why not indeed Sir?). The engine is now in my collection, absolutely perfect after the paint had been removed!
BrianCox - 26/04/2018
Mike Green, like myself, was a long-time friend of the late Rene Jossien. Mike wrote the Aeromodeller article, in 1989, presenting Rene's Le Veau Lent (1949), and showing a photo of a version that Mike had built. Rene was second in the French nationals, in 1949, flying Le Veau Lent. A drawing was published in MRA, in 1949 or 1950. Mike drew a plan up, from the MRA drawing I think, but he might have actually obtained a plan from Rene, and he built the plane, using a PAW engine. I don't think Mike made any design changes, apart from engine bearer spacing. Realising that no-one would have a Delmo engine(!), Mike showed the bearers spaced for a PAW engine. The reference to "3.46cc" on the drawing (implying an ED Hunter) is pure fantasy on the part of the Aeromodeller draftsman. I'm sure Mike didn't write that! There's no way you'd get an ED Hunter in that front end without considerable redesign. Until recently, I did actually have Rene's original (damaged) fuselage in my possession but, shamefully, it went with a "clear out", about 5 or 6 years ago.
BrianCox - 28/04/2018
Added image of the original plan, plus two of Rene Jossien, thanks to Pit [more pics 004-006].
Mary - 30/04/2018
This name "Le Veau Lent" (the slow calf) appears to be a devilish pun on "Le Volant" (the flyer) which in French sounds almost exactly the same. The pun then takes another leap as Le Volant was the name of some early pioneer flying machine, "flying" perhaps not to be taken literally ;-)
Miguel - 14/07/2021
Add a comment