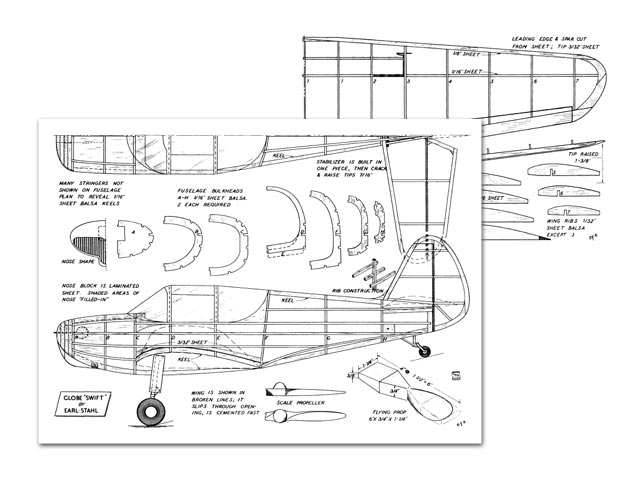 Much has been said and written about the potential boom in private flying, and, while it is true that young America is tugging to break the leashes of earthdom to soar through the air for pleasure and business, the great transformation to the predicted scene of clouds of private planes fairly darkening the skies is not yet at hand. For while thousands upon thousands of aviation minded persons are interested in furthering their individual flying aspirations, they are frustrated by the high purchase costs of planes as well as the rather great operating expenses.

At present the most modest sport plane costs about twice that of a prewar popular priced car, and while fuel and oil consumption compares favorably with these autos, costs of storage, maintenance, insurance, etc, boost the amount to the point where it makes flying an expensive luxury. Time will of course correct these conditions; mass production of planes structurally engineered to be fabricated in the fast manner of a car, lowering of maintenance and operating costs will go hand in hand and then, once this is accomplished, the flying age envisioned by many will perhaps be upon us.

Typical of the planes fast becoming available to the flying public of today is the Globe Swift, a snappy looking, fast little sportster. Looking for all the world like a miniature fighter, the Swift gains many admirers because of its appearance. But that is not where the ship's appeal ends, for it is an easy-to-fly craft with exceptional performance. With pilot and passenger and an 85 hp engine, it cruises at 125 mph for 600 miles; a 125 hp engine can be installed and speed is even greater. The undercarriage retracts in flight but when it is lowers and the flaps are depressed, the Swift slows up so it eases to the runway at close to 45 mph. Staunchly built of metal, it is unusually safe and durable. All in all it is a sportsman pilot's dream.

We have attempted to capture the eye appeal and flight characteristics of the real ship in our model; how well we have succeeded can only be judged by building and flying one yourself. Building the model is not difficult as standard construction practices are followed throughout; before starting, though, study the text and drawings to fix the details in mind. Work carefully as the reward for this is a better appearing, finer flying model.

CONSTRUCTION: The manner of fuselage construction calls for the use of four keels cut to shape from 1/16 sheet balsa. To obtain their shape trace the top, bottom and side outline shapes of the body. Bulkheads, likewise 1/16 sheet, are cut in accordance with the patterns given; two of each being required. Pin the top and bottom keels to the view and cement half of the bulkheads to place. Attach a side keel and when dry remove the structure from the plan and add the remaining bulkheads and keel. Stringers are 1/16 sq stock; attach the ones nearest the side keels first placing them on opposite sides in pairs to keep from pulling the structure out of line.

Between formers C and F where the wing fits in, curved pieces are cut from 3/32 sheet and they are shaped so as to make the fuselage sides fit to the curvature of the wing's uppersurface. Other items to be attached to the frame are the 1/32 balsa cockpit outlines as well as the very hard 1/16 balsa blocks in the rear, which anchor the motor.

The nose block just forward of bulkhead A is made from pieces of 1/8 sheet cemented cross-grain. Cut out the center for the removable portion to fit into and cement the whole nose in so it can be roughly cut to shape and then finished with sandpaper.

A hard balsa or soft white pine propeller block is needed for the flying model. Drill the tiny hole for the prop shaft first, then cut the blank to size and shape shown. Cut away the back surface of the block until the undercamber is as desired, then thin the front until the blades are of the desired thickness. Round the tips and reduce the depth of the hub a bit as shown. Blades are brought into balance by sanding. A free-wheeling gadget that will permit the big blades to spin freely in the glide is recommended for better flights. On our original model we used a second propeller, a scale one. It was made to the shape shown and we used a number of laminations of contrasting color wood to make it look realistic.

Tail surface construction is elementary and both stabilize, and rudder are made in a like manner. Cut the outline shapes from 1/16 sheet balsa and spars and ribs are 1/16 sq stock. When the flat frames are dry, lift them from the plans over which they have been assembled and cement very soft 1/16 sq strips to each side of each rib. These are later, cut to the streamline rib shape shown. Be sure to notice that the stabilizer has dihedral; it is cracked in the middle and tips are raised to provide this.

Wings are easily assembled in two halves; the builder will, however, have to make a left wing drawing as there was insufficient room on the magazine pages for it. Ribs are cut from 1/32 sheet except No.3 which is 1/16 thick; sand them carefully to exact size and cut the notches for the spars. Spars and leading edge are cut from sheet balsa and the trailing edge is a strip of 1/8 x 3/8 balsa tapered in correction. With pins hold the various parts and place over the plans, and when they are finished fit the two halves to­gether with 1-3/8 dihedral at each tip.

A sketch shows the landing gear detail. The strut is .040 diameter music wire bent as shown to attach to the wing structure..."

Note this pdf plan has been derived (stitched and aligned) from original scans posted by GTHunter at http://www.theplanpage.com/esp/swift.htm

Alternate plan, thanks to Dave Cushman:

See supplement PDF file for the Dave Cushman version of this design. This is a modern re-drawn version of the plan. It is a colour 72 dpi file, and shows full wing layout, clearer view of formers, etc.

Quote: "This new drawing, developed by Dave Cushman from original plans by Earl Stahl, can be downloaded and printed to form a building template and other copies can be printed to form templates for many of the individual parts of this 515 mm wingspan rubber powered Globe Swift."

Update 16/01/2019: Reshuffled this listing to now show the Earl Stahl plan as primary, the Dave Cushman plan as a supplement. 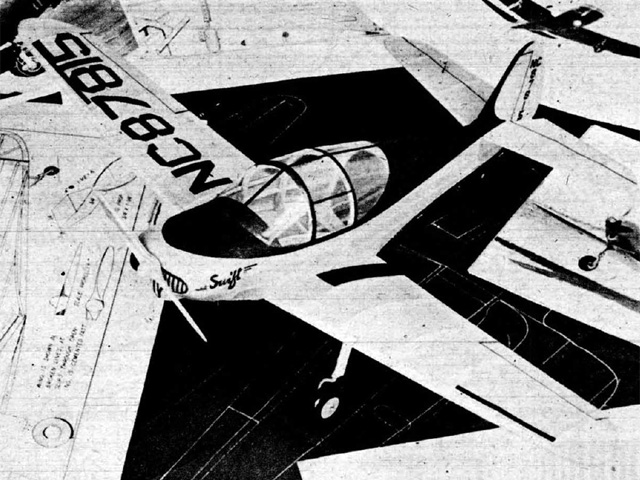