The Spitfire's elegant lines are still, nearly forty years after they first took the air on 5th March 1936 regarded by many as representing the pinnacle of piston engined monoplane fighter designed.

The elliptical wing and smooth stressed skin construction was more costly and complex than the contemporary Hurricane, but they conferred upon the "Spit" an edge of performance that ensured its continuance in first line service throughout and after the entire second World War. 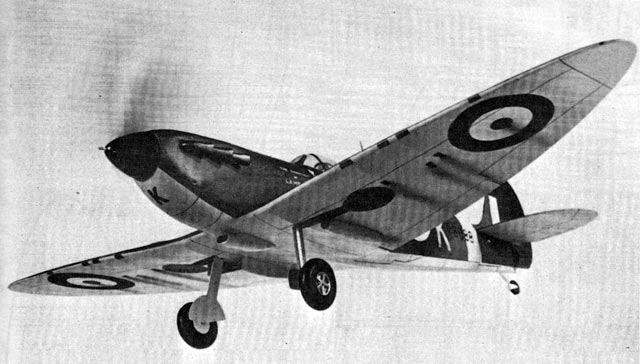 Spitfire based on the aircraft flown by Pilot Officer A Lumsden stationed at Ibsley in 1941 with No. 118 Sqdn.

Production commenced in March 1937, the first machine off the line flying in June, 1938. The Spitfire entered squadron service with No. 19 Sqdn. at Duxford in August 1938, and by the outbreak of war the following September over 2,000 Spitfires were on order.

By July 1940, nineteen Spitfire squadrons were on the R.A.F.'s strength and in the Battle of Britain which followed, the machine's superior performance was more than a match for the Luftwaffe fighters. Continuous development had produced an airspeed of over 360 mph., and the eight wing-mounted Brownings marked an enormous forward leap in aircraft armament.

Our model is based upon the machine flown by Pilot Officer A.S.C. Lumsden, stationed at Ibsley in 1941 with No. 118 Sqdn.

The early marks of Spitfire have always been tempting subjects for scale modellers. In classic design terms, it remains one of the most beautiful machines of all time. It is, however, in model form, not the easiest of subjects. The elliptical flying surfaces are more difficult to build than straight outline types, and the short nose gives rise to balance problems in a rubber powered model. Remember that fractions of an ounce saved behind the balance point will significantly improve flying performance by reducing the considerable amount of dead weight that must be placed in the short nose to achieve the correct center of gravity. 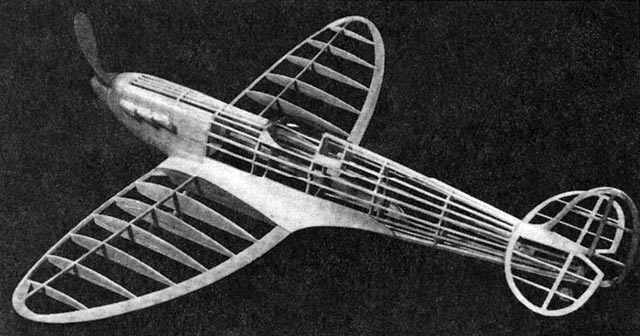 Classic lines of the Spitfire are evident even in its uncovered state.

The original model was converted for use with the Brown Jr. CO2 engine, and the elimination of the rubber motor behind the wing resulted in the saving of a 1/4 ounce... not at all insignificant when one considers that the total weight is less than 1-1/2 oz!

Quite apart from the improved performance resulting from the lighter model, trimming is greatly simplified, and adjustments become far less critical. So the message is clear . . . watch your weight!

Carefully join the pages together to produce a full fuselage plan. Line up the plan halves by placing a ruler along the center-line on K-6 and K-7 and the top view center keels. Hold the plan firmly with adhesive tape, then cover it with transparent greaseproof paper to prevent cement from damaging the plan.

Some time after the lead photo had been taken, the Spitfire was converted from rubber to CO2 power. In these two photos, the CO2 filler fitting can be seen underneath, just behind the propeller. The installation of the COj engine is detailed on the plans.

Cut out all formers and keel pieces. Cement all keels together where shown, lining them up carefully over the plan. Pin down K-1, 2, 3, 4, and 5 over side view and assemble former halves F-7, F-8, and F-9.

Carefully cement half-formers F-5 to F-13 (except F-10) to the keels, ensuring that they are all perfectly vertical. Now add side keels K-6 and K-7 and root rib R-1. Carefully cement the 1/16 square stringers in place, correcting any inaccurately cut slots as you go to ensure smooth stringer "runs" without kinks. Place F-14 and fit the small triangular fillets against R-1.

When dry, remove the half shell from the plan, fit former F-10, and built the port side directly onto the shell in the same sequence described above. In doing so, make sure that the top and bottom keels remain straight fore and aft as stringers are added. The 3/32 square center section wing leading edge is now cemented in place.

Now add formers F-1 to F-5, aligning them by their center holes. Now the nose can be filled in with 1/16 inch sheet. Leave the panels a little "proud" (sticking out) of the surface to allow for sanding to correct contour. The lower nose blocks are now cut and cemented in place.

Mold, the cockpit cover from thin acetate and check the fit, removing the top keel section between F-9 and F-10. Fit the rear rubber anchorage plate and the fuselage is now complete.

Cut out all 1/32 ribs and the 3/32 trailing edge and tip parts. Assemble W-8, 9, and 10 and carefully cut and sand to section shown, being sure to make one left and one right handed.

Wide propeller blades result from obtaining the needed area without increasing diameter, which would mean long, non-scale landing gear. Complete details on obtaining a camouflage finish as shown above will be found in the author's finishing article, starting at page 127.

When dry, remove from plan, and with the fuselage on a flat surface, fix both wing panels in place. Sand the root ends of the leading and trailing edges to butt properly against rib R-1. Prop up the wing tips 1-1/4 inches, and using plenty of cement, secure the panels in place, ensuring that the spars form a straight line in plan view from wing tip to tip, with no sweep forward or back.

Build the tail surfaces flat on the plan. When dry, remove, and assemble as shown, with small soft balsa fairings to blend into the rear fuselage lines. The tailwheel is assembled and securely cemented into a slot cut in K-5. Reinforce the keel with scrap 1/16 sheet either side at this point if necessary.

Bend the U/C wire as shown and fix with epoxy to F-7. Take care to make both legs of equal length. Place the two reinforcing plates over the wire before the glue dries. Half-rounded 3/32 x 3/32 legs are grooved to accept the wire and then glued to the card wheel well covers with the U/C wire sandwiched between.

Cut the two wing fillets from stiff paper, and using cellulose glue, fix in place, holding with the fingers until dry. Carve air intakes, exhaust stacks etc. and put aside to fix after covering. 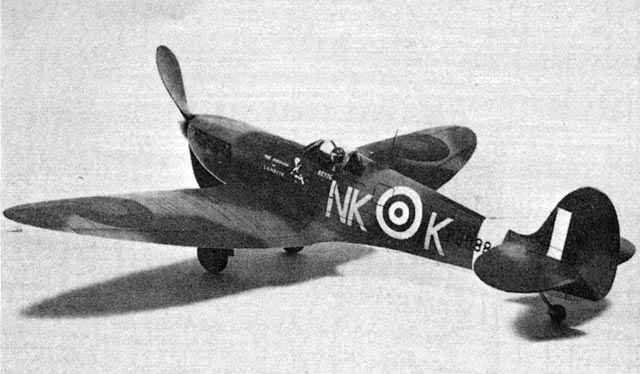 Note how the shading at the leading edge of the aileron gives it a curved appearance. This and many other fine touches is what makes the difference between a fair and excellent scale model.

The propeller assembly is clearly shown on the plan, and details of a free wheeling clutch are also given. The original model had the clutch hidden inside the spinner and thus it does not show in the photographs. The type suggested here is easier to construct for the average builder.

Wheel construction is also clearly shown on the plan. Be sure to round off the tire laminations to half-round section before cementing in place. Use epoxy to fix the aluminum tube bushing in place. 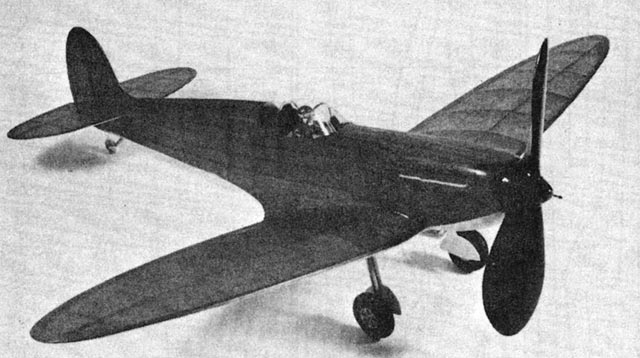 Note the generous blade area of the propeller in this photo of the Spitfire before the final finish was applied. Carving of balsa props for rubber power is covered on page 124.

Covering is carried out in sections in the normal manner as described elsewhere. FLYING

Balance the Spitfire at Former F-7 position. Any tail heaviness must be corrected by adding weight to the nose before glide testing.

A small, clear acetate trim tab is fixed to the starboard wing and turned up about 5°. The model should be allowed to turn left under the influence of propeller torque and about 2° right side-thrust should be built in to keep the nose up in the turn. The wing tab is adjusted to prevent the outside (starboard) wing from rising too far. Too much up tab will produce a right turn which must be avoided, as it will result in a spiral dive. Very little down-thrust was needed on the original model.

Details are given on the plan for the fitting of a Brown jr. CO2 engine. This is the ideal power unit for short nose models such as the Spitfire.

Note that fuselage former F-5 (revised) is placed 1/8 inch farther back from the nose than on the rubber powered version. Cut the openings in F-5 and in the fuselage underside for the gas bottle, after shaping the nose. The lower nose blocks are hollowed out to a wall thickness of 3/16 inch to allow the CO2 bottle to be placed.