The Hurricane marked the birth of the multi-gun monoplane fighter and the death of the biplane in the R.A.F.

Designed to Air Ministry specification F36/34, and first flying on 6th November, 1935, it was of steel tube and fabric construction unlike its contemporary, the Supermarine Spitfire, which was of stressed skin construction. The newly produced Rolls Royce Merlin engine of 1,000 hp. was a vital part of the design mix of both the Hurricane and the Spitfire, but it was not without its early teething troubles and these occasionally placed the whole project in jeopardy. 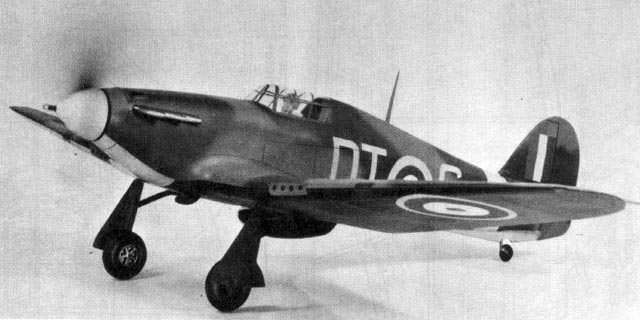 The authors model of the 1940 Hurricane as flown by Pilot Officer Pniak, No. 257 Sqdn., based at North Weald, in Essex.

Good fortune, hard work and dogged confidence on the part of Hawker saw the Hurricane through the critical first year, but it was not until June, 1936 that an Air Ministry contract for 600 machines was awarded.

Eighteen months later, No. 111 Sqdn. received the first production Hurricanes, and in February 1938 their Commanding Officer, Squadron Leader John Gillan, with a sharp eye for public relations and making use of a fine tail-wind, set up a new Edinburg to London record, a distance of 327 miles at an average ground speed of 408.78 mph! (The Hurricane's top air speed was a little over 320 mph).

The Hurricane was exported to several countries, including Belgium, Yugoslavia, Eire, Rumania and Finland but, of course, it was during the Battle of Britain in 1940 that its imortality was assured. 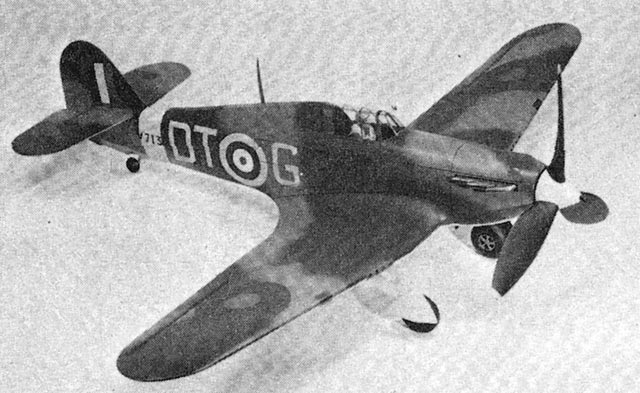 Doug McHards methods of covering, finishing, and detailing are well described in his photo/article beginning on page 118.

Its rugged, easily repaired structure was capable of absorbing an enormous amount of battle damage; and although perhaps the more elegant and higher performance Spitfire is now regarded as symbolising that epic period, the Hurricane bore the brunt of the fight during the first two years of the war.

Hurricanes were also built in Canada, the first of these fly ing in January, 1940. They served in all the major theaters of war from the Far East, 'round the world to the U.S.S.R. 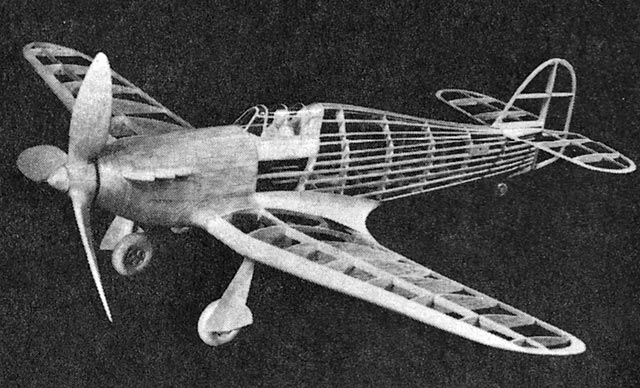 Doug has used more stringers than necessary on a model of this size in order to capture this outstanding characteristic of the Hurricane.

The propeller is really the only giveaway in this photo that the plane is not real, and points up the advantage of heving the prop in motion when taking such a picture.

Leading edge sheet may be stiff paper or 1/64 balsa. Sheet is formed to shape before glueing to framework. After wing is in place, remaining stringers are added. Landing gear is held in place by apoxy-saturated silk patches.

Our model is based upon a machine belonging to No. 257 Sqdn., based at North Weald in Essex in 1940, and generally flown by Pilot Officer Pniak.

An attempt has been made with this model to reproduce the bluff, rounded, multi-stringered appearance so characteristic of the Hurricane, but so rarely captured in miniature.

In models of this kind it is of course impossible to reproduce accurately every external feature of the original machine. Ribs will invariably protrude on the wing and tailplane, wheel wells will be painted on, and propellers will most likely be oversize.

The difference between an "average" model and a really good one frequently lies in the designer's ability to recognize the most important characteristics of the prototype and to reproduce them as closely as possible. If these key features are right, the rest of the model can often be simplified to its constructional and flying advantage.

The Hurricane framework before assembly. Note also the extensive use of molded plastic parts.

Dummy strut fairing is glued to wing only, and is not subjected to lending shocks. Wheel construction is detailed on page 124. Mattel Vac-U-Form is handy for small molded parts... if you can find one. They are no longer being made, but many are around.

It is my opinion that the Hurricane's personality has rarely been captured in small model form, and one reason for this is the difficulty of simulating the extra thick wing with its very blunt leading edge. Reduce this radius and you lose the Hurricane.

The rear fuselage really needs all those stringers to achieve a convincing effect, and the wing root leading edge fairing is another elusive point of reference. 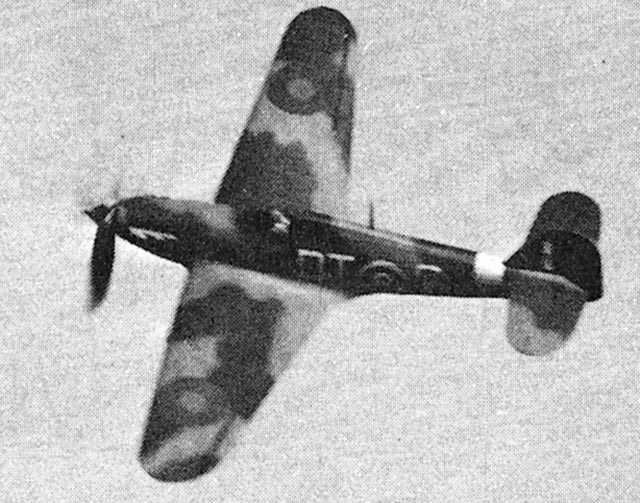 Doug's Hurricane banks to the left as it climbs out under the initial power burst.

The photographs illustrate my own attempt to overcome the difficulties presented by these constructional problems. Basically, however, the construction follows conventional lines, and with care, should not present any undue difficulties. 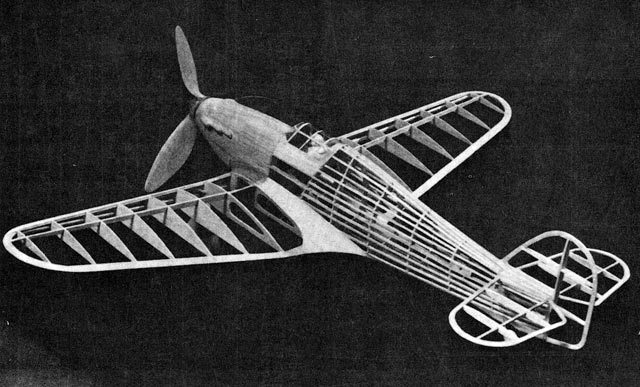 Profile Publications No. 111 "The Hawker Hurricane I.