The Zero was the most important Japanese airplane of WWII. At the beginning of the war it was far advanced compared to the Allied planes and had developed a reputation of being invincible. Because of its light and simple construction it was extremely maneuverable and had tremendous range. It was not until the capture of a nearly intact Zero in 1942 that the invincible Zero myth was to end. In September 1942, full reports of the Zero's shortcomings were released to the American pilots, and soon the stronger American aircraft took the advantage over the Zeros. As the war proceeded, the Japanese continually improved the Zero, but it was too late, and finally, during the last months of the war they were used in mass suicide attacks on the U.S. naval task forces. 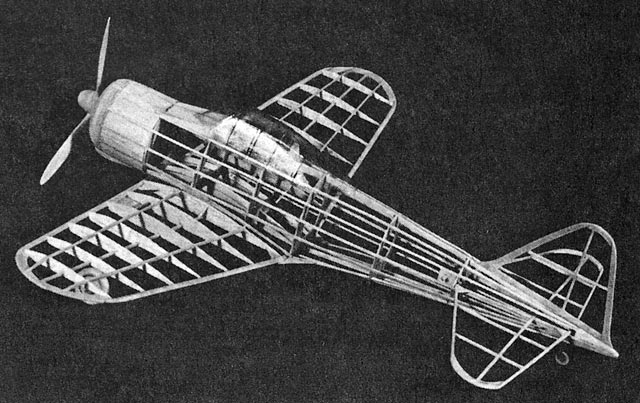 The Zero chosen for this model airplane is the Mitsubishi A6MS Type O, Model 21 which was used in the attack on Pearl Harbor December 7, 1941.

The wing, stabilizer, and rudder are of standard construction. Tape down the plan and cover it with wax paper or plastic wrap so that glue will not stick to it. Sheets 5 and 6 of the plan contain all the part layouts and wood thicknesses. It is suggested that you have these sheets copied so you can tape them down over the wood and cut out the parts through the copy with a sharp modeler's knife or razor blade. Pin parts down to plan and glue together. Leave top spars and gussets off wing until after dihedral is formed. Note: Add washout to wing tips when gluing in dihedral as this will improve the stability of the plane. Before covering wing, glue 1/32 inch wire landing gear to wing formers W-11. Use plenty of glue or epoxy on top and bottom of W-11, where the wire goes through, as this is a high stress area. 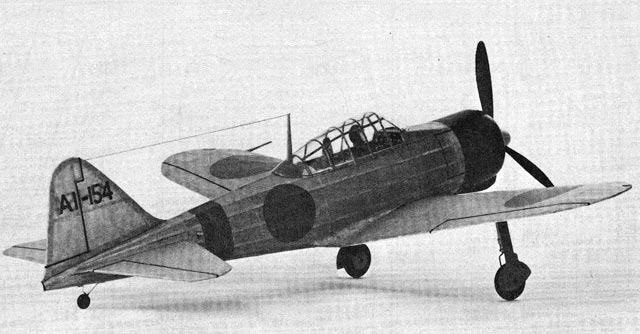 The famous Japanese Zero as it appeared during the attack on Pearl Harbor, Dec. 7,1941, was this Mitsubishi A6MS Type O, Model 21.

The fuselage construction is of the half-shell type and goes together much easier than it may appear. First, pin down keel parts to the plan. Now add the "A" half of formers F-7 to F-14 and the stringers, and let dry thoroughly. After removing from plan, glue other half of formers to opposite side and add stringers.

By the way, we glued the paper copy of the formers to the 1/32 balsa sheet to add strength and make the parts easier to cut out without splitting the wood. Remove the section of keel between F-9 and F-10 in cockpit area to add cockpit detail, if you wish. Fill in front of fuselage with sheet balsa as shown and add 1/8 inch thick formers N-1, N-2, N-3, and sand to shape. Do not fill in sheet wood around horizontal stabilizer until after model has been test flown and trimmed by adjusting stabilizer in this slot. The stabilizer can be held in place with rubber cement and balsa shims until final position is determined. 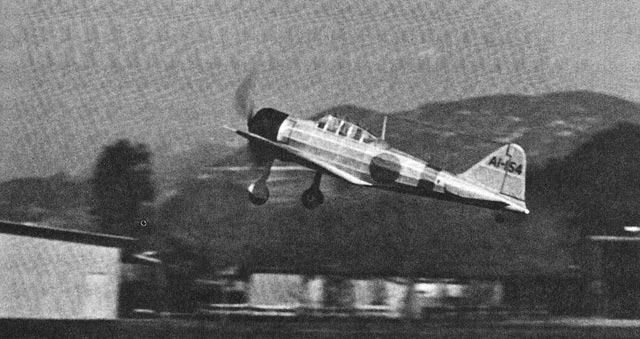 The nose block and wheels are made of 1/8 inch sheet balsa and use nylon bearings, available from Peck-Polymers, Box 2498, La Mesa, Calif. 92041. A package of 4 is 50 cents, postpaid. A scale propeller is made up of 1/8 inch sheet balsa blades. For flying, use a 6 inch dia. Kaysun plastic propeller or 7 inch Kaysun, cut down to 6 inch dia. The 7 inch Kaysun has a built-in free wheeling hub and a little more area for efficiency and weight to help balance the plane. Carefully sand the heaviest blade, as most plastic propellers are quite out of balance.

The canopy on our model was molded from clear plastic sheet on a Mattel Vac-U-Form. In order to fit the Mattel Vac-U-Form, the canopy had to be made in three pieces. Glue three blocks of balsa together with a piece of paper between each joint and then carve the canopy as one piece. Lay out the balsa mold with the front and back sections 1/16 inch longer to allow enough length for gluing the plastic parts together; also make the mold 1/8 inch higher on bottom to permit trimming the plastic after molding. Finish the male balsa mold with two or three coats of fiberglass casting resin, sanding between coats. This will give the mold a strong, heat-resistant coating for vacuum forming. Now cut the mold apart at the paper/glue joints, which will separate easily and cleanly. The parts may then be vacuum formed, cut out, and glued together to form the canopy. The easiest way to put the structure lines on the canopy is to use 1/16 inch wide silver tape, available at stationery stores. Put the tape on the inside of the canopy to prevent it from being pulled off.

The Zero is an excellent flying model, following its prototype in being lightly constructed and having clean lines. Left half of fuselage on the board illustrates the half-shall construction at an early stage.

The plane is now ready for finishing. Do not assemble wing, stabilizer, rudder and fuselage until after they have been covered. Before covering, paint the structure with a couple of coats of clear dope or you may have trouble getting the tissue to stick. We prefer using colored tissue and finishing with 2 coats of clear dope thinned about 50%. If you have trouble finding tissue the color you want, Marlow Engineering, 6850 Vineland Ave., North Hollywood, Calif. 91605, sells a variety that should meet your need. The color scheme on the plan is only one of several used on the Zero. Another is as follows: Olive green upper surfaces, light gray lower surfaces, black cowling, gray spinner, dull black blades. Still another color scheme, used primarily on Zero trainers, is overall orange with dark blue cowling, gray spinner, dull black blades. The references listed at the end of the article show other color schemes and markings.

The Zero in another typically stable flight. As with the full size ship, the framework is extremely light. Note scalloped formers for smooth covering. Canopy vacuum formed.

The insignia and other markings are cut from colored tissue and applied with clear dope. For control outlines, use 1/32 inch wide black tape available from hobby and stationery stores.

Now comes the moment of truth... "Will it fly?" First check for warps, and if found, remove by holding the surface over steam, bending in opposite direction and holding until cool. Repeat until surfaces are corrected. Next, check balance and add weight fore or aft until model balances as shown on plan. Be sure that when balancing you have the flying prop installed and a loop of 1/8 inch rubber about 11 inches long. Also note here that the nose plug should be a very tight fit with the fuselage, or it will fall out and ruin the model's glide. For test gliding small rubber model, we like to put in 15 to 25 turns so that the prop is not adding drag that may prevent a true evaluation of the model's performance. Test flying should be done in calm air and, as always, launch model into the wind if there is any. Adjust model with the horizontal stabilizer, as mentioned before, until the model has a smooth glide, neither diving or stalling. 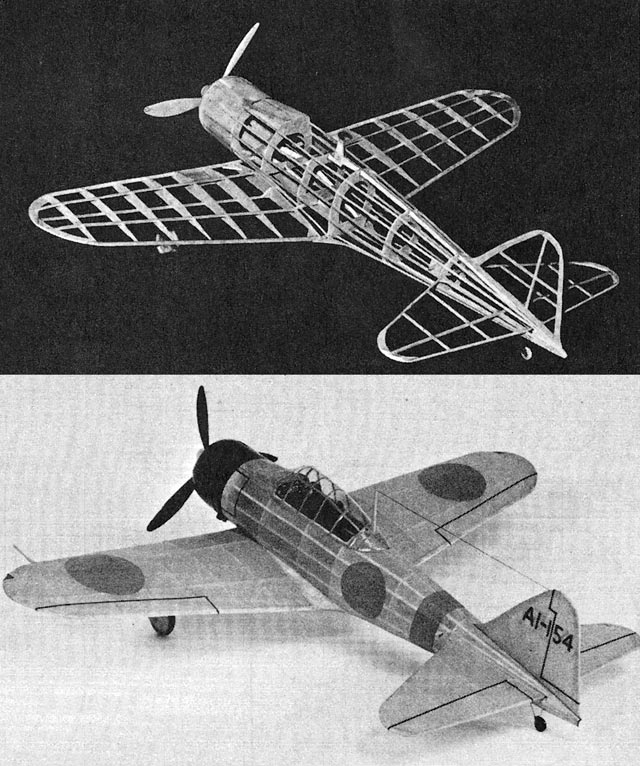 The before and after of covering are shown in these two photos, both taken from the same angle. Bob prefers to use colored tissue in order to save weight.

Total weight- with flying propeller and rubber motor was one ounce; the only adjustment needed was about 1° more downthrust. The model flew very well, with a stable climb and slow glide, using one 12 inch long loop of 3 mm (1/8 inch) Pirelli rubber. The best combination of power will vary depending on the weight of the model, propeller selected, and whether you want a fast climb or long slow motor run.