The smooth curve of the Mustang's bullet nose, the sharp belly curve of the coolant radiator, and the squared off fin, stabilizer, and wing are really incongruous. Yet the whole seems harmonious. Mustangs look as if they can get up and go... and they do just that! The P-51B version modeled here was the first to use the English Merlin engine. That gave the Mustang high altitude capability; in addition to speed, long range, maneuverability, and strength. Mustangs were used in all theaters in World War II, and in a variety of roles, with much success. One of the more famous of the B versions was Don Gentile's Shangri La, with thirty victories. 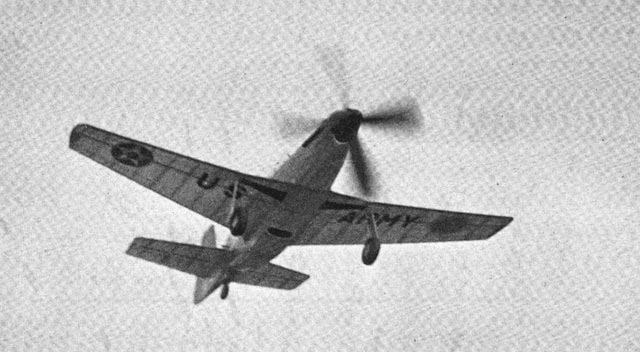 One of the best fliers of the models presented in this book, this P-S1 puts in flights that are consistently over a minute outdoors. Stabilizer area and wing dihedral were increased to improve stability.

The P-51 was designed and built in 1940. Originally, North American Aviation's president, "Dutch" Kindelberger, had been asked to build P-40's for England. North American had been considering fighter design and felt that they could come up with a better plane in the same time that it would take them to tool up for the P-40. Designer Edgar Schmued went to work, and the P-51 resulted. He utilized a radical laminar flow airfoil for low drag. The Mustang was one of the most popular and best performing fighters of the war.

The model presents a fine appearance on the ground and in the air. Flights exceed a minute's duration quite easily and show fair stability. Being a short-coupled low-winger, there is not a lot of inherent stability. The stabilizer was enlarged, dihedral increased, and the balance point brought well forward for additional stability. All flights have been outdoors, under breezy conditions. 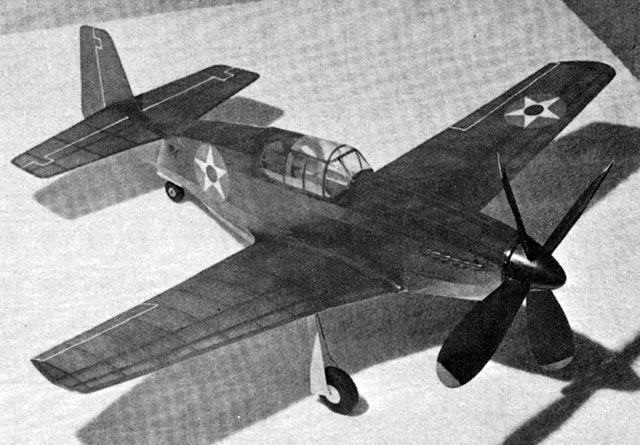 Blades of the big flying prop are built up from sheet stock and wet-shaped around a tin can. Colored tissue was used to help save all possible weight. Performance proves it paid off.

For good duration, keep the model light by using medium grade balsa, thin stringers, built up wheels- and thin coats of dope. Ours weighs just over three quarters of an ounce empty.

Pre-bend the stringers so that they conform to the fuselage curves. They will then slip into place without warping the rest of the fuselage. Do not notch the formers or ribs until they are in position on the fuselage and wing. Sight along spar and stringer marks when notching so that errors in their positions can be corrected. Considerable care was used in drawing the parts, but it is very difficult to trace, cut out, and glue such parts into position without some deviations. The formers are drawn slightly oversize to allow for some corrections. 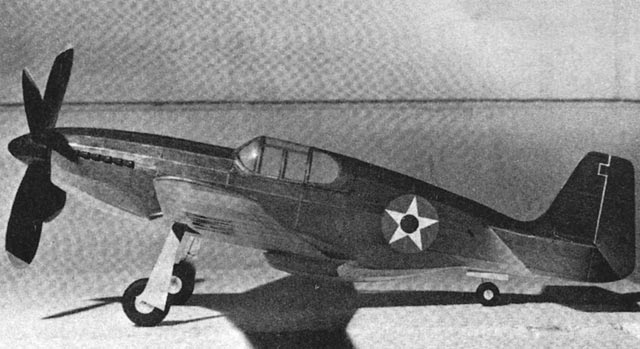 Profile shot of the Mustang shows off its well-known lines. The 8 model is often overlooked as the later, bubble canopied types are still flying at many unlimited air races.

When assembling the fuselage, leave off E-1, E-2, and E-3. Fill in areas around the nose and the rear motor peg with 1/32 sheet as shown. Complete the wing, including covering, and glue in place on the fuselage. Glue E-1 to the wing and add some of the coolant radiator stringers. Then_place E-2 and E-3 in position on the stringers. The front part of the radiator floats free of the wing making it awkward to construct. Small amounts of sheet between the stringers, where the rear of the radiator meets the rest of the fuselage, will facilitate covering. 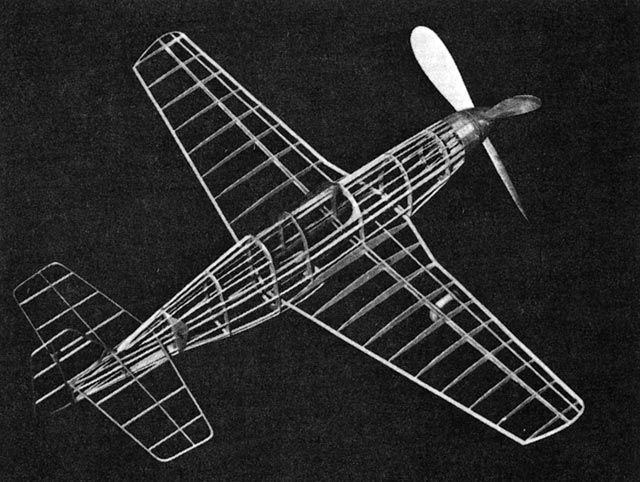 Secret to the success of the author's many flying scale models is summed up in this photo. The extremely light airframe not only performs better, it doesn't hit as hard in a collision!

If it is planned to shrink the tissue on the fin and stabilizer, it would be best to make them 3/32 thick rather than 1/16 as indicated. Ours is shrunk and doped and has developed slight warps. Twisting over a steam bath removes the warps but it is marginal. Cut strips 1/16 x 3/32 from sheet using a metal straight edge guide.

Glue the fin and the stabilizer lightly into position so they can be cut free and repositioned if necessary. Leave the fuselage area above the stabilizer uncovered until test flights are completed and no more adjustments are needed. Be sure to build in the angles shown, including the left wing wash-in. Place at least a 1/16 balsa shim between the top of the nose plug and the fuselage for down thrust before any flights are made! Use a 10 inch loop of 1/8 or 5/32 Pirelli rubber for testing, and launch over grass or other soft surface. The model should be slightly nose heavy with this short motor. As trimming progresses, longer motors can be used, which will weight the tail. 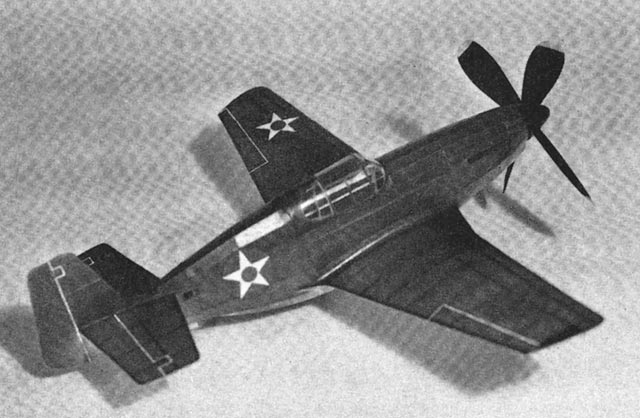 In a different approach to control surface marking, Clarence has used white lines. They do show up!

The original model was spray-doped with thin, colored nitrate dope. It was plasticized with ten drops of castor oil per ounce of dope. It was then thinned, two parts thinner to one of dope. If butyrate dopes are used, tricresyl phosphate (TCP) should be used for plasti-cizer.

Profile Publications is a good source of plans and particularly coloration. In the U.S.A., they are sold by J.W.C. Aeronautica, 7506 Clybourn Ave., Sun Valley, Calif. 91352. Aeromodeler had excellent detailed plans that include the B version. Their address is: Model and Allied Pulbication LTD. 13/35 Bridge St., Hemel Hempstead, England.