The challenge of the third dimension! Due to the fact that model aeroplanes do their thing in a fluid substance and can (and do) move in any direction, the problem of making them do what you wish them to is a challenging and rewarding one! Many factors are operating at the same time, and learning to sort them all out takes patience and practice. Rather than destroy your recently-completed stick-and-tissue beauty, why not spend a while practicing some of the following advice with an inexpensive R.O.G. rubber job of the "Sleek Streek" variety? No better way to learn the effects of moving rudder and elevator, warping wings (aileron effect) and adding weight, such as modeling clay or plasticine, to the nose, tail, or wingtips!

When you get ready to fly your own handiwork, you can increase your chances of success by keeping several things in mind while you are building. To begin with, remember that the magic word is LIGHTNESS! A 12 inch rubber scale model which weighs 4 grams can turn in flights of several minutes in thermal air, but one that weighs 6 grams may never see the other side of thirty seconds. Light models do not crash as hard, so get damaged less in the all-important early testing period. Build strength into the nose, as that's "crash central," and usually needs to have weight added anyway. Make a strong landing gear, with thin music wire embedded in balsa wood for larger models. Save weight in the tail, wing tips, and in parts which are non load-carrying.

No. 1 in importance next to lightness is adjustability. Darn few models will fly without adjustments, and the easier they are to make, the better! Having separated ailerons, rudder, elevators, attached with thin, bendable (not weak, however) wire helps. A must is a snug-fitting removable nose block which fits into a hole that has been made large enough to let a fully stretch-wound rubber motor back into the fuselage. It is also essential in making thrust adjustments for good power-on flight.

Finally, the model must be built "straight." Wings, stab, and rudder should be flat, without twists. Viewed from the top, one wing tip should be no further forward than the other. As seen from the rear, the stab should not be tilted in relation to the wing. The rudder must be flat. To keep out flight-destroying warps, be sure to use a plas-ticiser in your dope. Keeping away from colored dope saves weight, and about two coats of clear dope mixed 50/50 with thinner plasticised by a few drops of castor oil or tri-cresyl phosphate (T.C.P.) per ounce should do nicely. 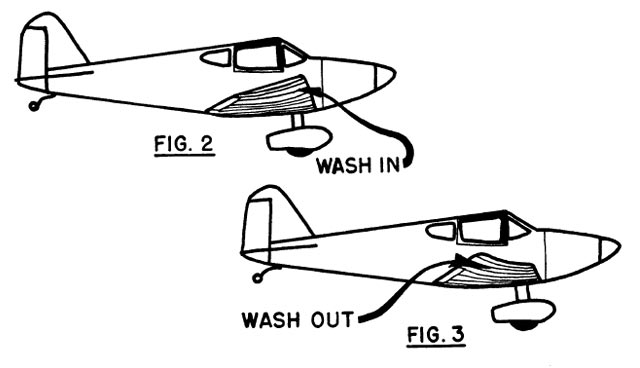 A pre-flight check list may help you get ready for the big moment with a minimum of problems:

1. Sight under wing and stab, from front and from back to check for warps. A little "wash-in" in the left wing is O.K. to help keep this wing up in a left hand power pattern. The stab should be absolutely flat. Twist surface in opposite direction over heat to remove warps. Wash-out in both tips is a good idea for low wing or low dihedral models. (Fig. 2, 3)

3. Balance plane at about 35% of chord, that is, the plane should balance "teeter-totter" fashion about 1/3 of the way back from the leading edge of the wing. Add clay to nose if necessary. (Fig. 4)

4. Make up a few rubber motors of varying lengths (avg. about half again as long as the distance between the rear motor peg and the prop hook) and rub some glycerin, green soap, or a mixture of the two into the rubber (Tie the knot first!). Stuff the longest one into your plane, oil the prop shaft and thrust bearing (or bead).

5. Load the following into a box and let's go: extra rubber, rubber lube, a knife, quick-dry cement or 5-minute epoxy, modeling clay, a book of matches (for shim stock), and a few scraps of balsa and tissue. Extra props of different sizes with prop shaft wire and long nose bending pliers are optional. Don't forget your rubber winder (16:1 hobby shop winder or a hand drill fixed up with a bent nail, head behind chuck jaws).

6. Caution: It's a good idea to keep your model safely in a box with a cover when not flying it. More models are damaged in transit than in flying!

The ideal flying site is a flat, treeless, grassy plain with a dead calm air condition (except for a few nice thermals rising straight up to stretch those flights!). If you ever find a place like that, let me know and I'll join you. Some sort of cushiony surface will, however, lengthen the life of your plane on the test hops, and wind is bad news for scale jobs, especially untested ones.

With a friend tenderly but firmly holding the model, stretch the motor out about two to three times its normal length through the front of the fuselage and commence winding. Just a few winds for the first hops, gradually working up to maximum, is the best policy. High power makes for high-speed crashes on untested ships.

The flight of a rubber model consists of two phases, the powered climb-out and the glide. The object of the first few flights will be to get the plane high enough to observe the glide and to adjust the model so that it makes a slow floating descent in a large circle. Once the glide is O.K., then the powered portion of the flight can be perfected by shimming the nose plug to change the thrust line angle. A perfect flight can be obtained by flying a right or left circle, but 1 find that turning left is safer. A bit of left rudder and a washed-in left wing will take care of torque under high power, while the glide circle will open up once the torque diminishes. Flying to the right, you are fighting torque; the power circle being held wide under power and tightening up on glide, sometimes to the point of a spiral dive. Still, many successful rubber fliers prefer the right turn due to its steeper climb, and you may wish to use it.

Your observation of what happens on each flight is very important. You must know which direction your model was turning when it crashed. You must know whether that dive was an "all-the-way-from-launch" one or whether it resulted from an extreme "nose up" launch and stall (Fig. 5). You may even want to keep a notebook of observations and adjustments tried, on a flight-by-flight basis.

Never re-fly a bad flight! Make a change before the next one and note the results. As flights improve, you may wish to add more winds, a heavier or shorter rubber motor for more power, or experiment with prop sizes (Use the largest you can get away with.). 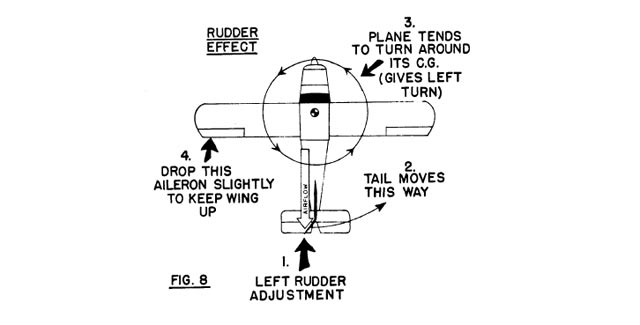 Note: Spiral propwash, or the twisting corkscrew of air coming back from the prop of a tractor model, imparts a right-hand counter-force to torque. The effect of spiral propwash varies with the configuration of the subject aircraft, and in many cases not only overcomes torque during the initial power burst, but may produce a disastrous right hand turn, lessening as the power runs down.

IF ALL ELSE FAILS

Major adjustments may be in order if remedies in the trouble-shooting chart fail. Should you have repeated problems in the stall/dive area with great changes in the C.G. necessary to get any kind of result, you might check your incidence angles, that is the relationship of the wing and stab to the aeroplane. Generally, the leading edge of the wing is set higher than the trailing edge (positive incidence), while the trailing edge of the stab is set higher than its leading edge (negative incidence). This can be checked by blocking the fuselage up level and using an inclinometer (protractor glued to a straight stick with a weight hanging from a string). If the difference between the wing angle and the stab angle is only a degree or two, one or the other should be reglued. Having plus 3 or 4 degrees for a wing, and minus 1 or 2 degrees for a stab is a good starting place (varies with aerofoil types, area differences, distance of stab back from wing, etc.) (See Fig. 15). Note: Biplanes need about 2° more positive incidence in the top wing than in the bottom one. 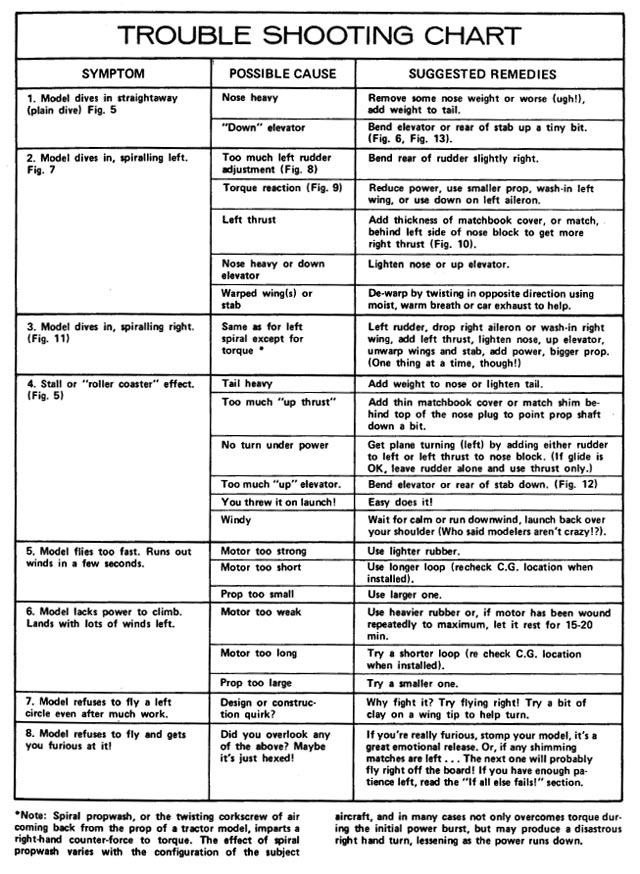 Another problem in a side-to-side direction is excess dihedral, (the "vee" of the wings as seen from head-on) which may result in the model "wagging its tail" and needing a larger rudder for correction ... or perhaps not enough dihedral which would allow the plane to sideslip when hit by a gust, diving and not pulling back level (cut down on rudder size or add dihedral angle).

Weighing your ship may also be revealing. A Peanut Scale ship should weigh about 5 grams (1/3 oz. maximum) for a 13 inch span. An 18 inch span ship might weigh about 18 grams (1-1/4 oz.) and a 36 inch span model about 86 grams (3 oz.). How heavy is "too heavy" depends on a lot of things, including wing area, drag, airfoil, etc., but if your model comes out double or triple these weights, part of your adjustment problem may stem from having to fly fast to generate enough lift to stay in the air. Of course, the faster you have to fly, the more "effective" little warps and misalignments become, and the more headaches they will give you. You will notice that lightness becomes increasingly important as the model size decreases. You can lighten your model at this stage by perhaps making balsa wheels, or you can make a new, perhaps larger stab, with a slightly curved top (lifting) surface out of lighter wood, which will allow you to remove some of the nose balance weight... if you added any. 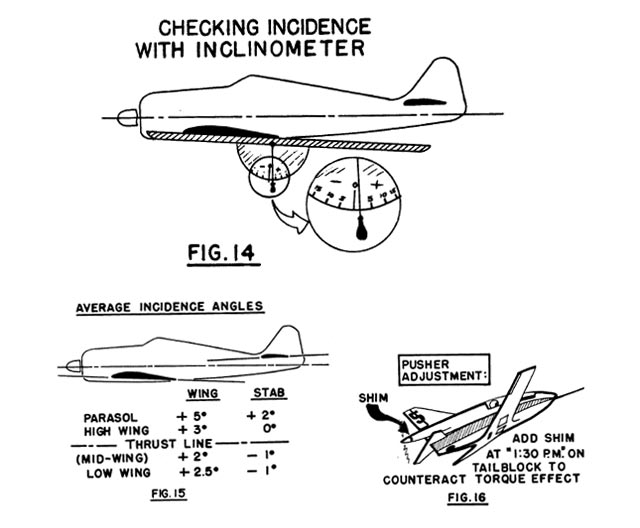 Checking incidence with an inclinometer

Last, but not least, don't hesitate to ask for help from experienced fliers in trimming your ship... if you can locate any near you. People who fly rubber are the greatest, and they'll bend over backwards to give you a hand, even if they're competing against you in a contest!