Designed for speed or team racing events this little "electroplane" has a good stable fast performance. The original flew many hundred "sorties" until it "angrily" tore itself loose from the tether and disintegrated. Insufficient allention had been given to strengthening the wing tip with a 1/16in. plywood tether plate.

Fuselage construction is simple. The motor drops in between formers F3 (cemented to plywood former F3A) and F4 (cemented to plywood former F4A) which in turn are cemented between the 1/16in. sheet sides. Two 10 BA screws secure the front of the motor to F3A. Then cement formers F2 and F5 into position, a doubler is made and cemented to F5 for additional strength. Then cement remaining formers F6 and F7 into position joining the fuselage sides at the rear by inserting two 1/8in. wedges leaving a 1/16in. slot for tailplane insertion (see section A-A). Nose former F1 is made from 1/4in. sheet with a smaller 1/16in. former cemented to the rear to support fuselage sides. A 1/8in. Riko slot car oilite bearing is "Araldited" into the 1/4in. hole in the nose block. Carve and cement F1A to the bottom of Fl and F2, then add air intake F2A. Drill through for air scoop. A brass propeller extension tube is Araldited (or soldered) to the motor spindle. The head is sawn off from an 8BA steel screw, and the screw then Araldited into the brass tube.

The propeller used is a 3in. x 1 1/4in. Cox as used with the Tee Dee .010 glo motor. The propeller is secured by three 8BA lock nuts and finally a spinner is made and cemented on. (I used a Woolworth's sample plastic lipstick holder sawn off at the end and with slots cut for the propeller blades by using a hot balsa knife blade). The cockpit floor was added, then 1/16in. sheet fuselage decking was cut, steamed and cemented into position. A hatch was cut out of the fronl fuselage decking for access to the motor, the hatch was secured internally by rubber bands.

To complete the fuselage add the pilot, canopy, exhaust manifolds, and finally sew and cement the tailskid to the 1/16in. fuselage bottom sheet, then cement in position.

The 1/16in. sheet tailplane is next cut and sanded to shape then cemented in the slot in the rear of the fuselage. Next shape the 1/16in. fin and rudder and cement in position on the fuselage decking. 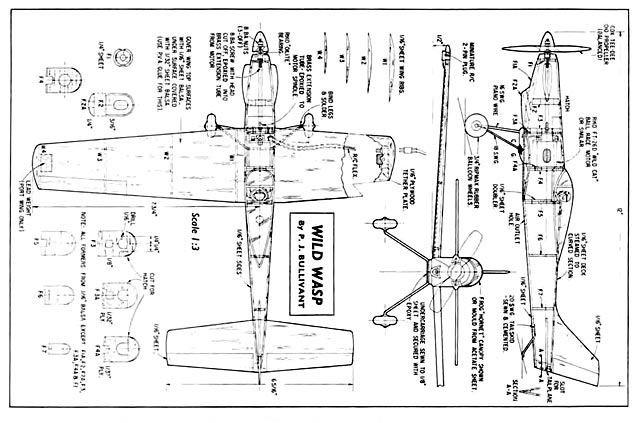 The entire lower wing surface is cut from 1/32in. sheet balsa and the eight wing ribs W1-W4 glued in position on each side using PVA glue (balsa cement tends to cause warping). The ribs WI-W4 on the right hand wing are drilled to allow the fine power wires from the motor to pass through. The wires should be routed through small holes in the right hand sheet undersurface at the wing tip. Next Araldite a suitable lead weight to the left wing tip and a 1/16in. plywood tether plate should be cemented to the right hand wing tip. Score the centre line of the sheet under surface of the wing, crack and bend gently upwards and cement to allow for the dihedral (1/2in. at each wing tip). Cover the top surface of each wing independently by using 1/16in. balsa steam-curved to shape and fixed with PVA glue. The 1/16in. sheet covering should "butt" fit at the centre line. Pin and leave to dry. Add the wing tips made from soft balsa and finally solder a miniature Radio Control two-pin (female) plug to the wires and Araldite to the undersurface of the wing tip. Glue the entire wing to the recess under the fuselage.

The undercarriage legs are bent to shape from a piece of 16 s.w.g. piano wire to which a rear support is bound and soldered. The support is made from 18 s.w.g. wire. Use fuse wire to bind these legs together. The undercarriage unit is then sewn and Araldited to the 1/8in. shaped block and finally cemented to the underside of the wing. Solder on the 3/4in. Ripmax rubber balloon wheels.

The wings and tailplane of the original model were covered with white Solarfilm. (Lt. Wt. tissue can be used). The fuselage was covered with tissue then given a coat of sanding sealer. Finally black and yellow diagonal enamel stripes were added along the entire fuselage length. Spinner and exhausts painted white.