Before starting the construction of the model, the plan should be studied to determine the position of the motor installation and this should be sketched in lightly with a pencil.

Quite a satisfactory motor mounting can be made by forming a box of 1/16in balsa around the motor, the box being supported between formers as required. For additional strength a platform can be cut from millimetre ply and glued inside the balsa box to form a strong floor. The sides of the mounting box should be drilled and filed to provide large enough holes for motor cooling purposes. If possible one side of the box should be detachable to permit removal of the motor for general servicing, if the motor has to be permanently installed, it is wise to make it as accessible as possible. If the box is constructed to about twice the length of the motor, adjustments may be made until the motor is located in the correct position in relation to the centre of gravity (C.G). 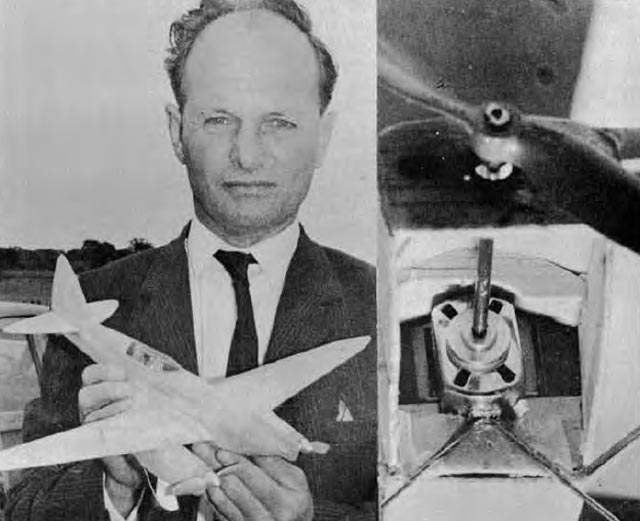 Author with his twin engined DH 88 Comet (Plan on previous pages) and at right, a 16D motor in a Frogflite Cessna with extension shaft.

Many electric motors are so designed that the circular housings which contain the main spindle bearings at the front and rear of the motor, protrude slightly. The motor can be "sandwiched" between two formers with the spindle bearing housings slotted into similar size holes drilled and filed in the formers, (A "rat tailed" file is ideal for the purpose). A thin "veneer" of millimetre ply cemented to one face of both of the formers provides additional strength and support for the motor.

Regular readers of the "Aeromodeller" may have read the April. 1971 edition, in which an article by David Wyatt, of Grantham. described his simple conversion of a 253'4in. span (Guillow kit) Focke-Wulf 190 to electric R.T.P. The FW. 190 graced the front cover of the Aero-modeller together with another excellent scale subject - Pat March's Republic P.35 "Lancer".

FW 190 model by David Wyatts, and installation details of FT 360.

Apart from such things as replacing the undercarriage wire with 14 s.w.g.. rubber tyred wheels at all three points instead of the plastic ones supplied, and a covering of 1/32in. sheet overall, Dave described his modifications for the installation of the Mabuchi FT-36D motor; he retained the original 10-tooth pinion which is supplied with the motor, and a 42-tooth gear wheel was fitted to a Riko slot car axle which is sold as a propriety part, consisting of a brass tube and split axle. The whole axle assembly was epoxy glued to the motor casing. 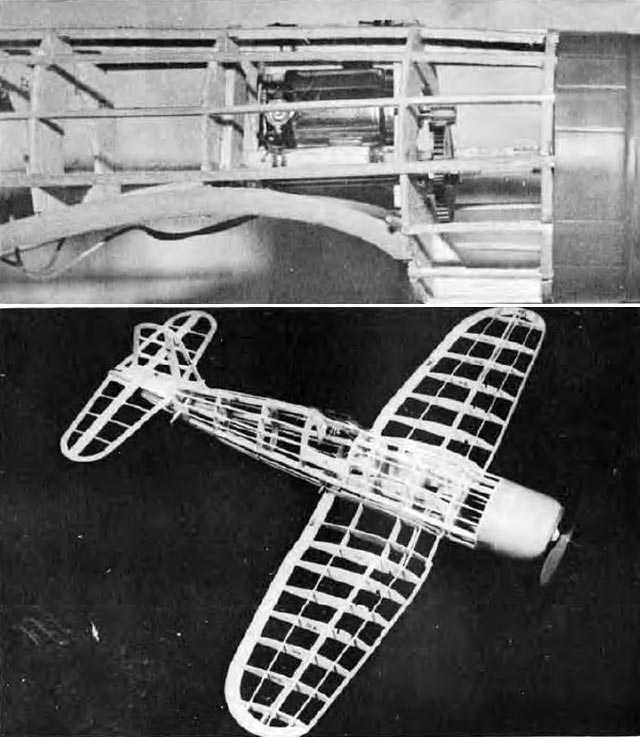 A Guillow Corsair kit. modified for Electric power, with motor buried in fuselage, driving the prop via an extension shaft. 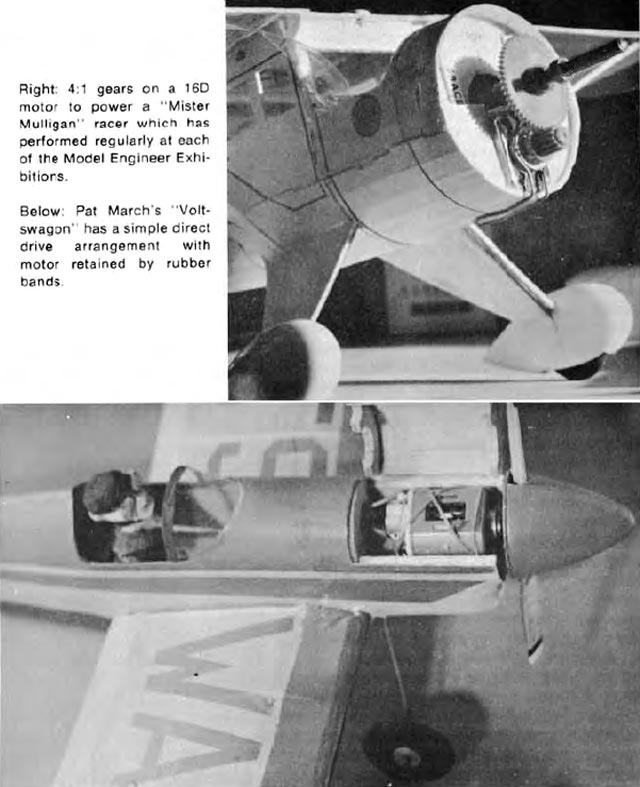 Right: 4:1 gears on a 16D motor to power a Mister Mulligan racer which has performed regularly at each of the Model Engineer Exhibitions. Below: Pat March's Voltswagon has a simple direct drive arrangement with motor retained by rubber bands.

The first former was cut down to take a balsa wood tray made up of two laminations of 1/16in. for the base, the 1/8in. sheet sides of the tray were taken to just over half the depth of the motor when the motor is lying on the tray. Holes were drilled in the bottom of the tray to assist motor cooling. The tray was made long enough to fit inside the cowling to former B2 to which it was attached. A small piece of packing was fitted behind the motor to bring the propeller shaft through the cowling. A bush was fitted to enable the propeller to clear the cowling. Dave constructed the three-bladed scale propeller from Duralumin, each blade was cut separately and bolted to a piece of three-ply cut to the same diameter as the spinner, enough room being left to fit the airscrew retaining nut.

WHICH WAY TO FLY Clockwise or Anti-clockwise?

One of the factors to be taken into consideration when mounting the motor is that of a phenomenon known as "Gyroscopic Precession". The rapidly rotating mass of the armature of the electric motor can be compared with a gyroscope. Consequently any force applied to the "flat" face of the gyroscope behaves as if that force was applied "90 degrees removed in the direction of rotation", and thus causes the gyroscope to "dip" or "precess". Hence it can be seen that the yawing force that a tether fixed to the right wing exerts on the "near side" (i.e. nearest pylon) of the front face of the armature, results in the removal of that force through 90 degrees in the direction of rotation to the bottom of the front face of the rotating armature, thus in turn causing the whole armature (thus the model) to pitch forwards. The longer the tether, the less the yawing force, and subsequently the less the forward pitch of the model. The example above is made with the assumption that the propeller is the usual type sold commercially, that is, that it rotates anti-clockwise when viewed from in front of the nose of the model. If the opposite (i.e. left) wing is tethered to the pylon, gyroscopic precession produces a "nose up" pitch. For this anti-clockwise direction of flight, the motor must be located sufficiently far forwards for the weight of the motor to counteract the upwards pitch under power. However, when the motor is "idled" the model has a very steep and poor glide as the centre of gravity is now well forwards. 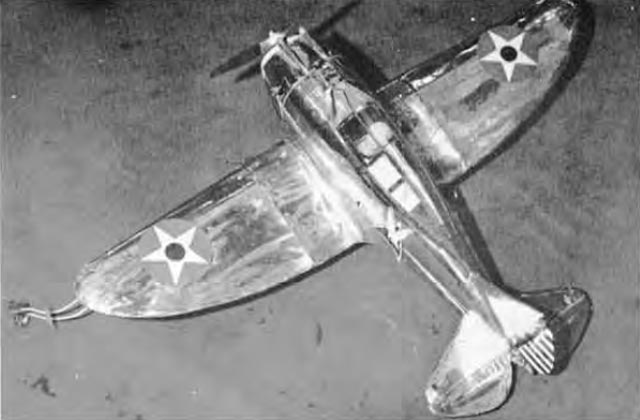 With the model fitted out for clockwise flight (right wing nearest pylon) the motor must be mounted further aft (often as much as 1-in-2 inches) for reasons explained above, but although an extension shaft is necessary from the motor spindle to the propeller, this arrangement is far more satisfactory. The model is slightly tail heavy when gliding, but this results in better "attitudes" for landings. Increased power settings cause a nose down "couple" by gyro recession and this in turn "dampens" any tendency for the model to zoom and stall.

Another by-product of clockwise direction of flight is that propeller torque tends to lurn the model away from the pylon, thus keeping the lines taut.